Since I absolutely loved reading Saratoga Letters (October 2016), I’m pleased to welcome author Elaine Marie Cooper. She made stepping into Revolutionary War times so real I could weep for her characters. Thank you for agreeing to answer a few questions about your writing adventures, Elaine. We’ll get started in a few moments.

But first, here’s quick look at Saratoga Letters: It is 1777. The Battle of Saratoga, a turning point of the Revolutionary War, encourages the American Continental Army with their first great victory. But there seemed little to celebrate for one patriotic woman forced to nurse wounded British soldiers right in their war camp. Thrust into deception by a cruel Loyalist uncle, Abigail is forced to lie in order to survive, all the while dealing with fears that challenge her faith. Danger stalks her everywhere, yet her salvation springs from an unexpected source.

Two hundred years later, on the anniversary of the Battle of Saratoga, thousands arrive from Europe and the United States to celebrate the event—including descendants from the war. One young American, Abby, meets another offspring of a British soldier. When her life is threatened, Abby turns to the only person she knows at the event—her British ally. Can she trust him with her life? Or will he betray her in the same way Loyalist spies betrayed her ancestors? Perhaps letters from long ago will reveal the truth.

Now back to Elaine … would you tell us a little bit about yourself? When did you first realize you wanted to be a writer?

I was about eleven-years-old when my dad encouraged me to pen my first short story. I am forever grateful that he gave me the confidence to try.

What attracted you to writing historical romance during the American Revolution time period?

Since I grew up outside of Boston, immersed in the landmarks of the American Revolution, I also grew to love the history of our country, the stories and lifestyles of Colonial America. Add my own family history, and I was ready to write historical fiction! 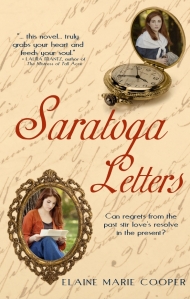 Where did you get your unusual story idea for Saratoga Letters?

Writing two different love stories 200 years apart was not my normal plot line. Yet my writer’s muse was piqued when I visited Saratoga: A park ranger told me about the bicentennial celebration of the 1777 Battle of Saratoga … and I lost my motel key! The lost key morphed into a mystery-suspense story that connected to the past.

What was the most challenging about writing Saratoga Letters?

Definitely the research! It became a nightmare. But with the Lord’s help, I managed to pull the story together. It was actually easier to get the information needed for 1777 than to gather the facts for 1977. I made a series of phone calls and sent emails to numerous people in the Saratoga Springs area to dig out the details of the bicentennial celebration. Now I can’t wait to meet the many historians and others who helped me in my research to thank them in person.

So, what do you hope readers will take away from this story?

I always hope readers will understand that our ancestors who lived long ago were not unlike us in many ways. They shared the same hopes and dreams, and while times and customs change, what is in the hearts of mankind—both good and evil—remains the same. And God continues to seek the hearts of men and women to serve Him today, just as He did long ago.

What do you like best about the writing life?

Working in my jammies? LOL!

I just want to say “thanks” to readers who enjoy my stories and take the time to share their thoughts in reviews. It means so much that others are blessed by my stories, and I praise God Who has given me the ability to write.

Elaine Marie Cooper’s other published novels include Fields of the Fatherless, Bethany’s Calendar, and the historical trilogy the Deer Run Saga. She grew up in Massachusetts, the setting for many of her historical novels. Her upcoming release is Legacy of Deer Run (CrossRiver Media, Dec, 2016), Book 3 in the Deer Run Saga.

Find out more about Elaine on her website/ blog, www.elainemariecooper.com