I don’t recall the disagreement, but I’d had enough. “I’m not staying where I’m not wanted!” I shouted at my new husband.

In a flurry of anger, I set out in the dead of winter, marching down Algoma Blvd toward the college campus. It was Sunday … I was pregnant … and I had no clue where I was going.

Though a student at Wisconsin State University-Oshkosh, I suddenly recalled the campus was all but shut down for the weekend. My family had moved out of state two weeks after Jim and I married. But wait … the Neuman Center would be open. Yup. That’s where I’d go. Never back to that man!

But I didn’t know my husband.

A few blocks later, a car pulled over, and the passenger window rolled down. “Hey, 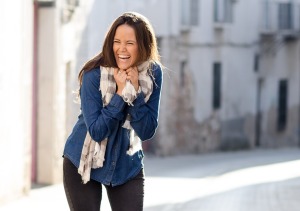 Who did he think he was fooling? I knew that voice. And that car. I stuck my nose in the air and marched on.

Well, I’m probably better off without him. Though I wish … oh, what difference did it make what I wished. I’d had two chances and blew them.

Now nearing the campus, I approached a corner with neatly trimmed bushes edging the property. Out popped Jim with welcoming arms and a big grin.

I collapsed into laughter, and he took my hand. “Let’s go home, Beauty.”

If you’re thinking Jim had his hands full with me, you’re right. Down through the years, my faithful husband had other occasions to rescue the day with humor.

Oh, and in case you’re tempted to feel sorry for him, don’t bother. I once told him I felt sorry for him. He was indignant. “I like a challenge!” he insisted.

All right then, sweetheart.

PLEASE SHARE: Do you have a humorous story to tell on yourself?

Only a month after our wedding, Jim and I faced each other in the living room of our tiny apartment. Sadly, we admitted we’d made the biggest mistake of our lives.

How could it be, when we had started out loving each other so very much? 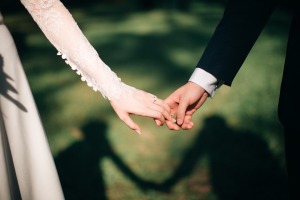 I swallowed hard and looked to my strong, handsome husband. “What do we do now?”

He thought for a moment, and then quietly delivered his conviction. “We stick it out.”

God must have been proud of us for making our momentous decision. I know, years later, we remained glad we did. Yes, we faced struggles and disagreements through our 47 years of marriage, but we also enjoyed the rewards of choosing to love. Of learning to be patient, kind, and forgiving–no small fete! Of growing deeper in love while wrestling with every challenge that came our way.

Our family also grew–two sons, five grandchildren, and one great-grandchild who are very dear to us. We experienced the love and fun and kindness of extended family on both sides. What a rich, full life we would’ve forfeited if we had decided to quit, rather than “stick it out.”

Your Turn: Please share your own particular circumstances where you’ve been glad you chose not to quit.